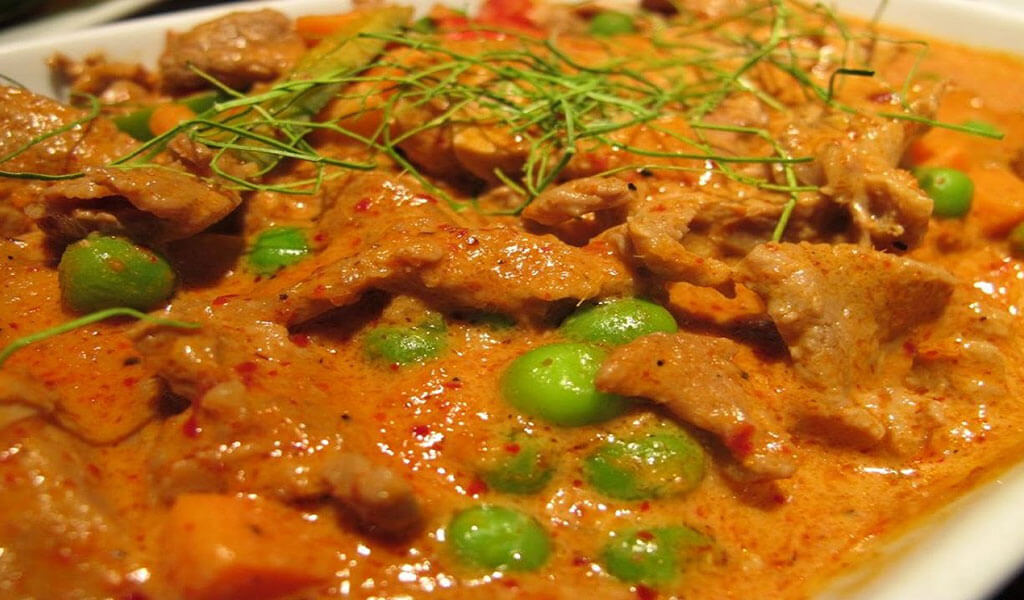 A close relation to the Rendang curries of Malaysia and Indonesia, this curry is a favourite of all Thais. It is not as hot as other curries, and is rich and creamy from the coconut cream and peanuts. Thais do not normally like to eat beef, but this curry is the exception. Chicken or pork can also be substituted….

I am originally from Melbourne, Australia and have always wanted to live and work in South East Asia; in 2016, that dream became a reality. My husband, Shane, along with our two pugs, Papillon and Fanny, moved with me to Hua Hin, Thailand.

Both Shane and I have a passion for food and travel, as well as a love for all things SE Asian, having travelled here for the last 25 years or so. I am lucky to be able to work in Thailand and in the travel & tourism industry. This allows me to share our experiences; from travelling and eating all around the world and in particular, in Thailand.

Wan Khao Phansa : วันเข้าพรรษา is a period of three lunar months during the rainy season when monks are required to remain in one particular place or temple.

This tradition originates from old times when Buddha stayed in temples during the rainy season to avoid killing insects or harming the growing seeds. It is a period for study, meditation and teaching of new monks. The monks are allowed to go out during the day but they must sleep in the same temple every night during these three months.

Mostly the activities o­n Wan Khao Phansa (Rains-Retreat Entry Day) are same as those o­n any other Buddhist holy days. Two main important things presented to monks during Khao Pansa are the candles and garments worn by monks, specifically the bathing robe.

In the old times there was only candle light to be used around the temple, and on the entry of the rainy season, Thai people made large candles as offerings to be used during this season. Some believe that as a result of this custom, they become brighter, and smarter – similar to the characteristics of the candlelight. This tradition passed on from generation to generation and it is still present today.

Wan Khao Phansa is also the national “No alcohol day”. All venues are prohibited from wholesale or retail distribution and sales of alcohol. The government also encourages their people to stop drinking during these three months with the campaign งดเหล้าเข้าพรรษา [Ngod Lao Kao Phansa].

Asalha Puja Day, one of the most sacred days in Buddhism, is observed on the 15th Day of the Waxing Moon in the Eight Lunar Month to commemorate the day on which Lord Buddha delivered his first Sermon, or Dhammachakkappavattanasutr, before the first five disciples in Buddhism. The day also marks the beginning of the worship of the Triple Gem, namely: the Lord Buddha, His Teachings and His Disciples.