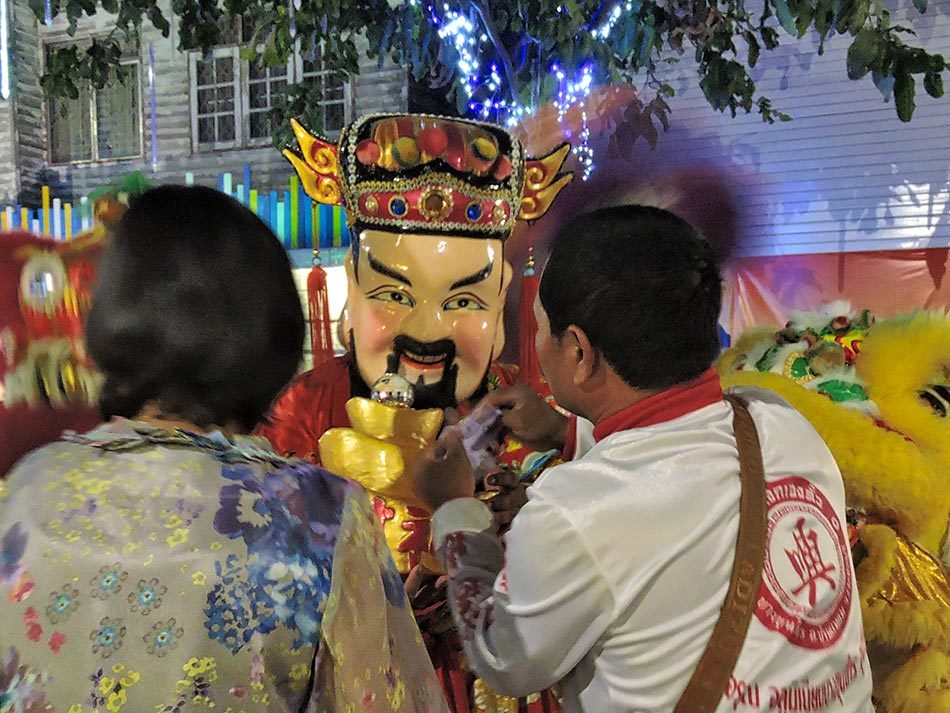 China’s most important traditional festival is known as the Spring Festival, or Chinese New Year. It is one of the most important celebrations for families as well, and a week of official public holiday in mainland China.

With Thailand having the largest overseas Chinese community in the world, the celebrations here are almost as magnificent as they are in China.

CNY celebrations occur from Chinese New Year’s Eve until the Lantern Festival, which is the 15th day of the first Chinese calendar month. If using the Gregorian Calendar, the first day of the CNY falls on the first New Moon which occurs between January 21 and February 20.

Dragon Dances and Lion Dances are now commonplace during celebrations. The noise of drums and cymbals together, as well as the vigorous dancing of the Lion or Dragon, is thought to ward off any evil spirits.

It is a centuries old festival which gains added significance due to several myths and traditions. One of those myths pertains to a creature who went by the name of Nian.

Legend has it that in ancient times, living deep beneath the surface of the sea, or in the mountains, lived a monster named Nian. Described as having a long head and sharp horns, it appeared in the village every New Year’s Eve to eat people, particularly children. It also had a taste for the villagers’ livestock.

On New Year’s Eve each year, the villagers would flee into the distant mountains so as to avoid being harmed by the monster. Nobody knows how long this had occurred for, but one year, an old man appeared in the village on New Year’s Eve and said he would stay the night and not follow the villagers into the mountains. They all thought him mad and expected him to be dead and the village destroyed when they returned the next morning. To their shock and amazement, the village was in tact and the old man was still alive when they came down from the mountains.

When asked how he had survived the night, the old man replied that he had pasted red paper on all the doors, lit candles in the houses, donned red clothes and burnt bamboo to make a loud cracking sound. This amazed the villagers, but they saw the proof with their own eyes.

Every New Year’s Eve since, the people did exactly as the old man had done and Nian never reappeared.

The tradition continues to this day and with the invention of gunpowder, with fireworks to follow, the latter have replaced the burning of the bamboo. All of these rituals have become the most significant ways to celebrate the arrival of the new year.

Over time, the festival became about honouring deities as well as ancestors. You will find CNY celebrated in any country where you find significant Chinese populations, including Cambodia, Indonesia, The Philippines, Vietnam, Malaysia, Taiwan and of course Thailand, where the major cities and many regional areas have enormous celebrations. Naturally the islands of Singapore and Hong Kong have huge CNY celebrations as well.

Over time, regional variations on customs and traditions have developed around Chinese New Year. In many regions, New Year’s Eve is a time for Chinese families to gather for an annual reunion dinner. At this time, many families will give their homes a thorough clean. This is thought to remove any bad luck and to make way for the incoming good luck.

Nowadays, small red envelopes containing money are also handed out during the celebrations. Amounts vary from the equivalent of a couple of dollars to several hundred dollars. Custom dictates that the amount of money should be even numbers; odd numbers are associated with money given during funerals.

In China, the number 8 is considered particularly lucky, due to the fact the pronunciation of the Chinese word for 8, Ba, is very close to the word Fa, which means wealth or prosperity.

There are no particularly special dishes served during Chinese New Year celebrations, though a few dishes have become traditional.

The New Year’s Eve dinner is the most important dinner for the Chinese during this celebration. Normally, this is the family reunion dinner, especially for those with family members away from home.

In the New Year’s Eve dinner, fish is customarily served. Dumplings are the most important dish in Northern China. These two dishes signify ‘prosperity’. Other dishes are served depending on personal preference. The majority of the Chinese will gather together to eat New Year’s Eve dinner at home instead of a restaurant.