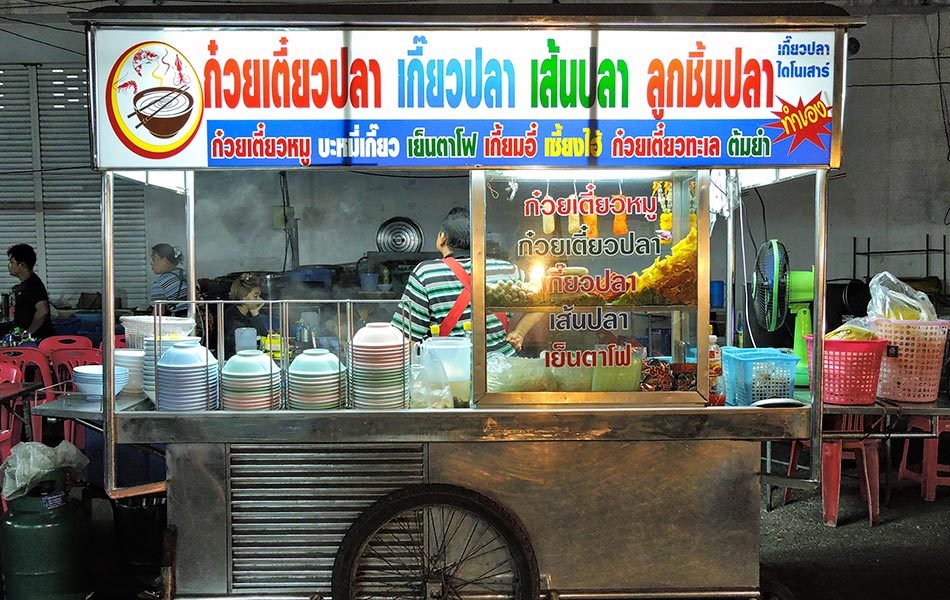 hais love eating noodle soups and you will find soup shops and mobile street vendors everywhere, though it can sometimes be quite daunting to the uninitiated as to what soup they are making.

There are many different types of noodle soups sold all over Thailand, however many travellers may walk past the queue without ordering because of uncertainty as to what the vendor is selling.

Many noodle soups are of Chinese origin, however over time, Thailand has developed her own flavours. A noodle soup generally is called Guay Tiaw, which can be eaten morning, noon and night, as they are a quick and versatile meal. Most vendors will specialise in one or two types of Guay Tiaw, so it is as easy as picking your type of noodle and adding a protein.

The most common Guay Tiaw soups are:

Guay Tiaw Reua • Boat Noodles; they normally come in a dark broth flavoured with soy sauce and spices plus some pig’s blood, this is cooked in the broth to give it a more intense pork flavour.

Guay Tiaw Nam Dtohk • Very similar to Boat Noodles in that it will be a dark broth flavoured with soy sauce and spices plus some pig’s blood.

Variations on the broth are Nam Sai • A clear broth or Nam Khon / Nam Deang • A dark broth with a sweetness, enhanced by spices.

Yen Dtaa For • A sweet and sour pink soup which gets it colour and flavour from fermented soybean paste. It is often served with pork, fish balls, fish cake, slices of squid, fried tofu, slices of water morning glory, rectangles of coagulated blood and a big crispy wonton chip. It may be served dry or with the broth and ingredients together.

As you approach the vendor, they will want to know which noodles you want. Follow the links to learn about each:-

Often a vendor will serve only one protein, or they may ask your preference:-

Many soups will have additional proteins added such as pork or fish balls, as well as bean sprouts, Chinese celery and morning glory. Additional toppings may include deep fried garlic, coriander and spring onions.

It is also possible to order these soups done dry; Haeng. This is great for people not wanting an animal-based broth. Most of the soups are not spicy, so it’s great for those averse to chilli. At every soup vendor, a condiment set is on the table so you can flavour it to your taste. The typically Thai flavours of hot, sour, sweet and salty can be adjusted to suit your taste. Taste first, then adjust; everyone does it!
Be brave and venture into the myriad of noodle soups: Eat like a local!

Listing my favourite soup shops was a difficult task, as some of the best simply have no name. One such vendor is the girl set up in Soi Hua Hin 72/4 Alley, just outside the Hua Hin Shopping Mall. She has the best Guay Tiaw Dtohm Yam I have ever tasted! Excluding her, here are my Top 5, based on my personal experience.

Writing this blog was challenging, as for something so seemingly simple as a noodle soup, there are so many variations, however I found my favourite soups all by accident; by pointing, nodding and saying yes; Chai Kha. That’s what you should do too. Nothing was ever offensive and if it was, I just didn’t eat the bits I did not like. Most soups range from 20 to 50 baht in Thailand.

Tell Me What You Think Cancel reply