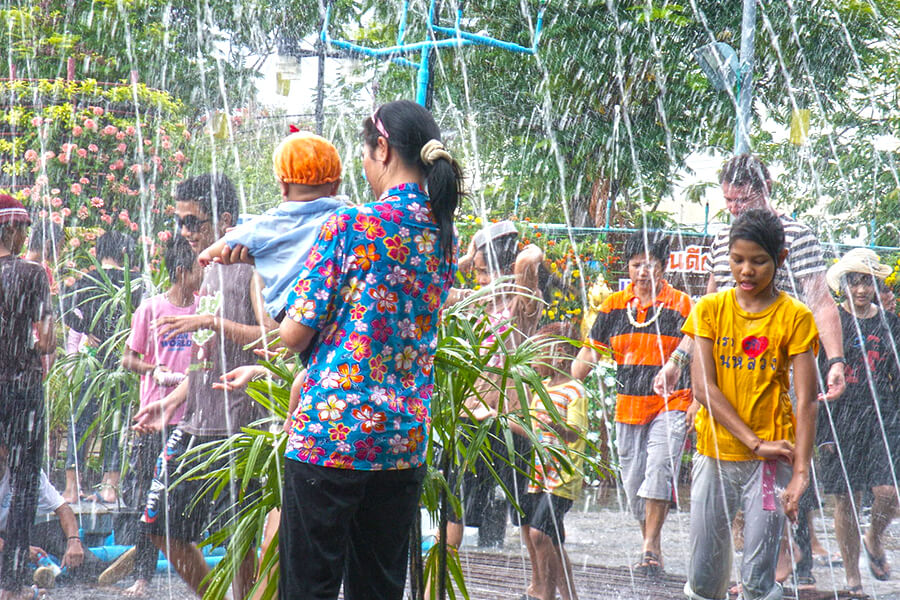 April Focus: Songkran
It’s April in Thailand and this means just one thing - Songkran (สงกราน), the Thai New Year's festival. Though the celebration period usually includes the 14th and 15th of April, as preparations commence and excitement grows, New Year's Day itself in Thailand is officially celebrated on April 13th. Before Thailand adopted the international New Year’s Day in 1940, Songkran was calculated based on the Solar Calendar, which varied from one year to the next.

Like so many words in the Thai language, the word "Songkran" comes from the Sanskrit. The word saṃkrānti literally translates as "astrological passage", signifying transformation or change. As April is Thailand’s hottest month, the change signified by Songkran is the end of the dry season and the beginning of the annual rains, occurring in the fifth month of the Thai lunar year.

In India, they have a festival to mark the arrival of Spring, which occurs in January. This Hindu harvest festival is named Makar Sankranti. This is where the name Songkran was borrowed from. 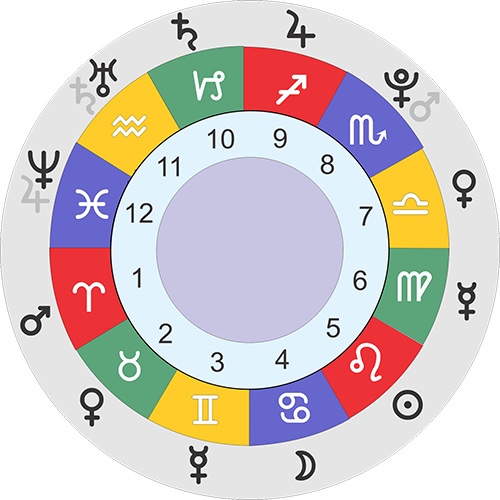 Astrology
Astrologically speaking, Songkran coincides with the rising of Aries on the astrological chart and its passing into Taurus. This event heralds the New Year of many calendars of South and Southeast Asia. The sun’s position and its movement from Aries into Taurus has become very important to the Thais, due to the importance placed on the movements of heavenly bodies. The Thais have adopted a 12 year cycle which aligns somewhat with the 12 astrological signs of the Zodiac.

Outstripping all other festivals in Thailand for Astrological significance, the Songkran Festival is by far the most important and widely celebrated event of the year for the Thai people. It is a time of enjoyment, yet also a special time to show respect for water, the most important element in the rural culture of Southeast Asia. Water is used as a symbol of cleansing as well as a symbol of renewal.

Merit Making
Making merit is an essential part of Songkran, a celebration which is rich with symbolic traditions. As with many Thai celebrations, mornings begin with merit-making, with many people visiting the local temple and offering food to the monks. The offerings include preserved foods cooked dishes, fresh fruit and new robes for the monks.

Sand may also be given in some areas to assist in repairs. People build sand piles on the temple grounds; these sand piles represent personal pagodas built as part of the merit-making ritual. Animals like birds and fish may also be released. 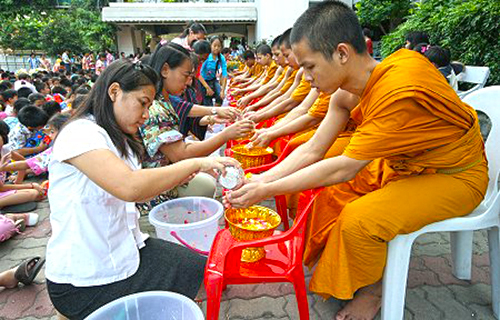 Merit Making
Making merit is an essential part of Songkran, a celebration which is rich with symbolic traditions. As with many Thai celebrations, mornings begin with merit-making, with many people visiting the local temple and offering food to the monks. The offerings include preserved foods cooked dishes, fresh fruit and new robes for the monks.

Sand may also be given in some areas to assist in repairs. People build sand piles on the temple grounds; these sand piles represent personal pagodas built as part of the merit-making ritual. Animals like birds and fish may also be released.

Traditionally performed on the first day of Songkran (aka National Elderly Day), the Rod Nam Dam Hua ritual is a gesture of humility. In it, young people pour fragrant water into the elders’ palms and ask for their blessings. They may also pour scented water over the shoulder and gently down the back of the person, whilst uttering blessings and words of good will. Vastly different from what has now become the accepted water free-for-all, this gentle practice is a sincere gesture and a mark of respect. Now it is buckets of ice water and water guns on the streets.

Known as National Family Day, the second day of Songkran sees many families arise very early in the morning to offer alms to wandering monks. Afterwards, the rest of the day is spent with the family all together.

An important religious ritual occurs on the third of Songkran, known as Wan Payawan. It is the ‘Bathing the Buddha’, in which Buddhists pour fragrant water over Buddha statues both at the temple and at home. It represents purification and the washing away of one's sins and bad luck. It also marks the first official day of the New Year.

As a very unifying festival, many family members who have moved away often return home to their loved ones and elders. It is also extremely important to pay reverence to ones ancestors as part of the Songkran tradition.

Central Region People in the Central region often clean their houses as Songkran approaches. They may dress up in colorful clothing. After offering food to the monks, many will offer a requiem to their ancestors. People may make merit by such offerings as giving sand to the temple for construction or repair. Other forms of merit include releasing birds and fish. Nowadays, people also release other kinds of animals such as buffaloes and cows.
South Southerners have three Songkran rules: 1. Work as little as possible and avoid spending money; 2. Do not hurt other persons or animals; 3. Do not tell lies.
North In the Northern region of Thailand, April 13 is celebrated with gunfire or firecrackers, said to ward off bad luck. On the next day, people prepare food and useful things to offer to the monks at the temple. As with much of Thailand. people also go to the temple to make merit and bathe Buddha's statue; afterwards pouring water on the hands of elders and asking for their blessings.
NorthEast Very similar to other parts of the Kingdom, though people in the NorthEast always make merit at the temple throughout ALL the days of the Songkran Festival. Some people, after making merit at the temple, prepare food to be given to the elderly members of their family. 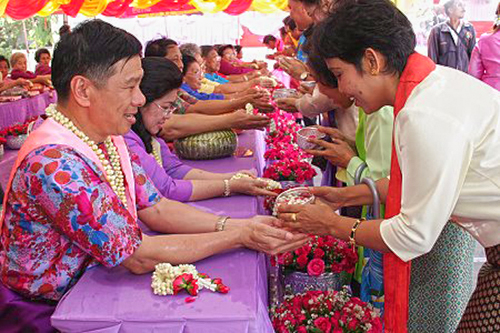 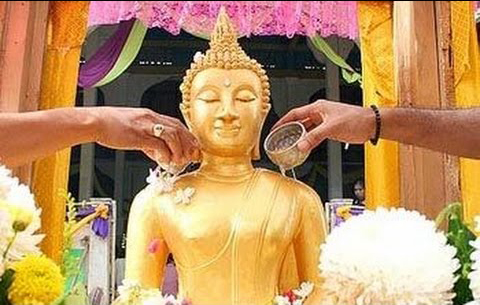 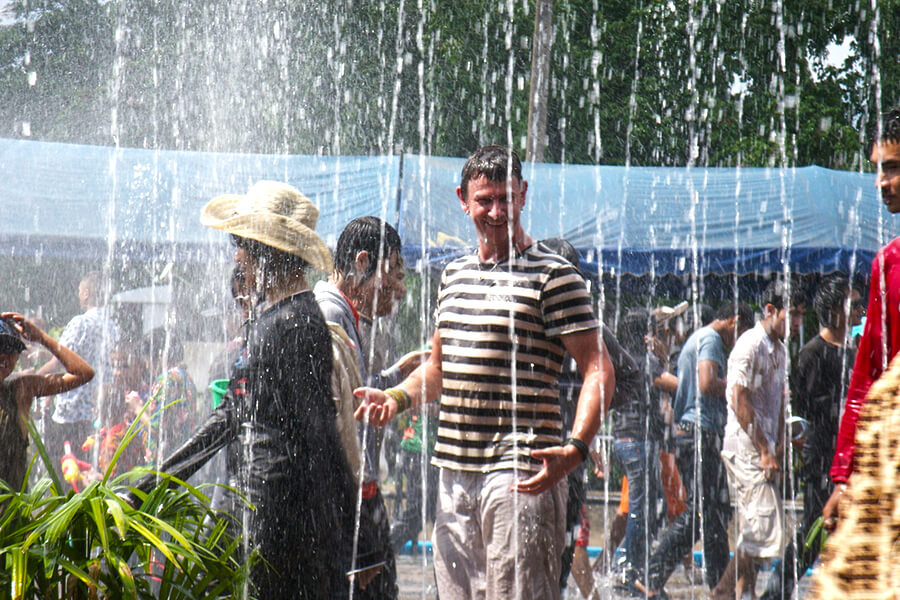 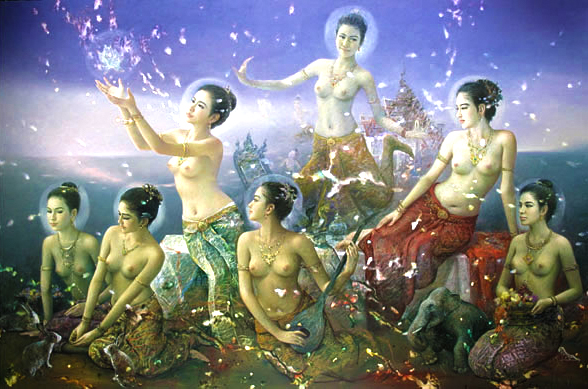 Like many celebrations and festivals in Thailand, Songkran has its origins deeply rooted in myth and legend. With Songkran, the myth revolves around Nang Songkran, or the Seven Ladies of Songkran.

In Thailand, the Hindu god Brahma, the creator and four-faced god, was also known as Kabila Phrom. He enjoyed betting and one day met a seven year old boy prince named, Thammabal Kumara who was prodigious in learning, being able to recite scriptures in public. The boy was also reputed to be able to understand the language of the birds. Kabila Phrom wanted to test the child's knowledge so he descended to earth and presented three riddles to the boy. Should Thammabal answer the 3 riddles correctly, Kabila Phrom would offer him his head to the boy. However, if the boy failed to come up with answers within seven days, he would lose his own head to Kabila Phrom. The three riddles were as follows:

1. Where did a person's aura exist in the morning?
2. Where was a person’s aura at noon?
3. Where did it appear at night?

For six days the boy agonised over the answers to the riddles, yet could not come up with them. One the the seventh day, whilst lying under palm trees, he heard a male and female eagle joyfully talking about how they would soon be able to feast on a boy's dead body. Not knowing the boy was was able to hear, the two eagles revealed the answers to the riddles. Thammabal immediately went to Kabila Phrom and recited the answers,

"In the morning, a person's aura appeared on his face, so he washed it. At noon, it was at his chest; so, he wore perfume there. And at night, his aura moved to his feet; that was why he bathed them”.

Kabila Phrom had lost the bet and so had to cut off his own head. Kabila Phrom's head, however, held special powers. It was extremely hot, so if it should touch the ground, the earth would be engulfed in a firestorm, destroying all life; if it should be left in the air, there would be no rain, bringing about vast drought and if it should be dropped into the sea, the sea would dry up. In order to save the world from these possible disasters, the god's seven daughters, the Nang Songkran, placed their father's head on a phan (tray) and carried it in procession around Mount Meru before placing it in a cave on Mount Kailash with many offerings. Thus, at the beginning of each year, Kabila Phrom's daughters would take turns to bring out the god's head and carry it in procession around Mount Meru, this celebration is known as Songkran.

The seven daughters represent the seven days of the week and all have their particular names and vehicles that they ride on. The one who carries Kabila Phrom's head on Songkran Day is called Nang Songkran, Miss Songkran. Thus, in some locations, "Miss Songkran" is crowned, where contestants are clothed in traditional Thai dress.