Originally from Bangkok, Mr Kwanchai Suwansri moved to Phuket to work in the food industry. He worked there for a period before deciding to relocate to Hua Hin.

After moving here, he looked for a similar job in the food industry here, but without success. It was then that luck smiled on Mr Suwansri, as a chance presented itself for him to start his own business. He opened his restaurant, Khun Goong, on Naebkehard Road in Hua Hin, where he now works with his mother, Mrs Somboon Suwansri (Khun Goong) – yes, he named his restaurant after his mother.

The majority of the dishes are cooked Mr Suwansri, but there are some dishes that only his mother could recreate. Being from Bangkok, it took him around a year to adjust the levels of spice and seasoning to match the flavour and taste of Southern food.

“What is it that makes your business so successful?” we asked Mr Suwansri

“For me, it’s about making food from the heart”. All the food he and his mother prepare is done so with meticulous care and a great love of food. He is all about good service, being sincere, and as Mr Suwansri always says, “Smile”, which he does a lot of.

Another thing that he strives for is helping people. “Eat first and pay later” is his motto. On finishing after the lunch period around 1pm, if he still has food unsold, he will give what is left to older people or people less fortunate who really need it. He never keeps food to sell the next day, as everything must be extremely fresh.

We asked what his most popular dishes were, to which he replied: 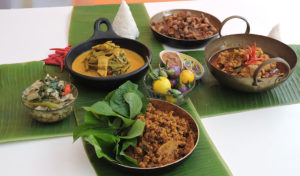 There are some dishes that he admits he does not do so well; for these he has the trusted cooking skills of his mother. Two of the dishes that he freely admitted he could not cook as well as his mother were:- Kai Pa Lor (ไข่พะโล้) Eggs in a 5 spice broth and Tom Jood Pak Gad Dong (ต้มจืดผักกาดดอง) A clear soup of pickled mustard greens and pork mince.

A typical day for Mr Suwansri is waking up at 3am to prepare for the day. Cooking begins at 4:30am and by 6:30am, the food is ready to be served to the many hungry Thais. His day concludes around 1pm, or earlier if the food has all sold.

To Mr Suwansri and his mother, Feast Thailand says, “we’re happy to have you on board!”

We’ll have another food hero in December’s newsletter.